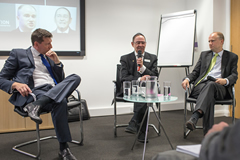 I have had a particularly interesting week, speaking at an event on the future of transport for the Institute of Directors and hosting a Downtown forum in Leeds with Sir Howard Bernstein and Tom Riordan on Wednesday, whilst keeping a close eye on the fascinating debate on the Independence Referendum in Scotland, the result of which is analysed elsewhere in this bulletin by my colleague Jim Hancock.

The assumption following a significant number of concessions to the Scots by Westminster’s top table during the course of the campaign is that England’s regions will be able to negotiate a new settlement that will see significant powers and responsibilities devolved, probably to the city region level, sooner rather than later.

But, as Leeds Chief Executive Riordan pointed out, the Mandarins in Whitehall will ‘be on manoeuvers’ in a bid to ensure that any such transfer of power is as diluted as much as they can get away with.

Bernstein told the Downtown audience that in Greater Manchester this year £22 Billion of public spending had taken place. He made a compelling and straightforward case as to why we would get a better bang for our buck if local politicians, decision makers and business leaders were able to decide how that resource should be applied, rather than those decisions being taken by London based civil servants who simply know cities like Liverpool, Manchester and Leeds as places on a map. One of these faceless bureaucrats recently asked a fellow presenter of mine at City Talk radio station if Liverpool was in the North East – I kid you not.

Scotland’s ‘indy’ campaign means that the genie is out of the bottle as far as how resources are currently distributed, and where the power really lies in deciding how that cash should be spent; and clearly the North has started to get its political act together with a coordinated approach to transport infrastructure spend through the publication of the One North document. There is also a genuine lobbying effort taking place to wrest as much devolution from Westminster to the region’s as is possible from the core cities group.

Nonetheless, Riordan’s warning about Whitehall Mandarins needs to be heeded, as my visit to London last week starkly reminded me. The media, business leaders and most MP’s down there still believe that the North should be content to get the crumbs off ‘their’ table.

A third runway, Cross Rail, more investment in the London road network, an average spend per head of population that is around £15 more than is spent on the rest of us are benefits that will not be relinquished without a fight. The business community needs to join our political leaders in that fight.

Many of the challenges we face, not least skills shortages, connecting quickly and effectively with a wider customer base in our own region, and the business support and economic development agenda, would all be better tackled at the city region level. If the private sector doesn’t get behind those messages, the Mandarins who believe we still wear cloth caps and clogs will deny us the opportunity. Join the conversation, get involved. Downtown is providing you with the platform to do so with a series of conferences throughout the autumn, so there is no excuse!