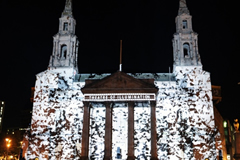 News that Leeds is considering a bid to become the European Capital of Culture for 2023 should be encouraged, embraced and supported by the city’s business community.

In an age of council cuts and austerity, investing scarce resources in a campaign that may or may not be successful is clearly a risk, but if Leeds is to demonstrate that it has an entrepreneurial approach to its future then this is exactly the type of project that the city has to go for.

Following the superb hosting of Tour de France I wrote here that it was important for Leeds to create a momentum and legacy to this event, and a bid for the Culture title would put a marker down that tells the rest of the UK that Leeds is ambitious and means business.

Liverpool spent over £150m on the European Capital of Culture in 2008. In the event year itself, the badge enabled the city to generate income in excess of £750m. That is a success by anyone’s standards, but it only tells a small part of the story.

What CoC did for Liverpool was to re-establish the city’s self-confidence, win much needed inward investment, create a strong visitor destination economy, and act as a catalyst that has seen Liverpool become the best visited city in the UK outside of London and Edinburgh.

Economically Leeds is in a much stronger position in 2014 than Liverpool was when it decided to bid for CoC in 2004. Nevertheless, Leeds has built a reputation as a centre for professional services that has a strong retail offer, rather than a place that has a broad cultural offer to complement its healthy commercial activity. The fantastic gems the city does have tend to be hidden, and a year in the sun would unearth some of Leeds’ fantastic cultural assets.

This is an opportunity for Leeds to add an additional bow to its marketing package. The city should go for it.