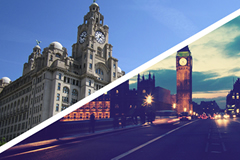 There was little surprise with the news this week that for every one job created in the North since 2004, twelve have been created in the South, according to a Centre for Cities report that is summarised here.

The fact that this latest study covers the past decade also shows that neither the previous Labour government, with its push towards regionalism, nor the current coalition administration, have been able to reverse what is an unhealthy and unacceptable trend that has been part of the UK economic landscape for generations now.

The devolution programme that George Osborne has been driving through his ‘Northern Powerhouse’ initiative has not, of course, had a chance to prove whether it will be the key to finally solve this long-standing conundrum, but if the regions and cities across the north grasp the opportunities he is offering, then I have no doubt that more strategic planning and spending on transport, skills, training and economic development at a local level will contribute to a growth in city region jobs and wealth.

However, more radical proposals are necessary too, not least identifying new ways of supporting existing businesses, and as importantly encouraging start up’s.

The Northwest and Yorkshire is still way short of where it needs to be in terms of VAT registered businesses, and the ‘enterprise culture’ that successive governments have attempted to establish has not been delivered.

There are still too many public sector led ‘business support’ projects – I still shake my head in disbelief when I hear local government officers who wouldn’t know a balance sheet from the back end of a bus waxing lyrical about what business needs – and a range of financial incentives in place that actually favour larger companies who would have ample access to finance in the mainstream market anyway. The Regional Growth Fund is the most obvious culprit, but it is not on its own.

Our man in Manchester Michael Taylor has restated Downtown’s belief that we need a regional investment bank in his blog here and it would certainly be on the menu of change that is required if we are not to be talking about an even bigger North-South gap in 2025.

But a much bigger infrastructure spend than Osborne has announced, with house building and improving the regions motorway network at the centre of the plan; a drive within city regions to focus at least as much attention on growing our own talent as we do on inward investment; and a new range of genuine financial incentives for small companies who have ambitions to grow, with tax credits for those who take on more staff are just a few possibilities to be considered.

As we approach the General Election in May, Downtown will be agitating for change and suggesting as many new ideas as we can. Join the conversation and let me know what you think could begin to close the North-South economic gap.

RT @DowntownBusines: @DowntownFrank will be joined in the #DowntownDen by Strategic Director for Growth & Development at Manchester City Co…

RT @DowntownBusines: “The one thing the government should have learnt from the last nine months, surely, is that we can’t have a one-size-f…

RT @UnitedCity: Boris Johnson's 'levelling up' council is under criticism as most of its members are based in London. Hear what #UnitedCity…