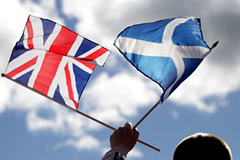 When Westminster politicians and mandarins met their Scottish counterparts back in 2012 to negotiate the terms of the referendum for independence, they believed that they had delivered a crucial blow to the devolution bandwagon by refusing to allow the Nationalists the opportunity to have an additional option on the polling slip that, basically, offered voters extra devolved powers within the union.

The thinking was that a majority of Scots would jump at the chance of more power for a Scottish Parliament that was still within the structure of UK governance arrangements, but they would run a mile from the notion of abandoning a 300 year union that, let’s face it, has been the principle reason for Scotland not becoming some sort of third world banana republic!

As if those north of the border would be daft enough to go for full blown separation given the enormous economic damage it would cause to their nation; why give them an easy third option that would offer Alex Salmond & co everything they wanted with the continued safety net of the United Kingdom?

Of course it is easy in hindsight to suggest that this was an arrogance too far, and that the third option, which is ironically now being offered in the form of ‘Devo Max’ as Westminster politicians scramble to recover lost ground in the final days of the referendum campaign, should have been accepted and put on the ballot paper. But in actual fact at the time the negotiation team was applauded for its strength and tactical genius in putting the Nationalists in their box. Few, if any, political commentators believed that the people of Scotland would vote for a divorce from the UK.

Of course what nobody could factor in back than was the absolutely shambolic nature of the ‘better together’ campaign that was to follow.

Putting the super bright but charisma- lite Alistair Darling in charge of the ‘No’ campaign was a stroke of lunacy that must have had Nationalists rubbing their hands with glee. Darling, in fairness, has had poor material to work with. The negativity of the messages from Better Together has turned people off massively; at best being seen as ‘same old politics’ at worse bullying.

By comparison the ‘Yes’ campaign have been consistent in simple messaging, time for a change, get the government you vote for, you can’t trust Westminster; and this has been articulated by a charismatic leader.

This has led to an incredible turnaround in opinion and latest polls show that the race is now too close to call. The Sunday Times poll last week gave ‘Yes’ a 2 point lead that has sent shockwaves through the corridors of political, establishment and financial powerhouses across the UK.

Salmond has secured the ‘big mo’ just at the right time, and the Nationalists can smell an unlikely victory.

Belatedly ‘No’ have woken up to the fact that it is in a genuine contest that it may lose. The big gun that is Gordon Brown, still a popular figure in Scotland, has been rolled out with the alternative proposals that, had they been included in the referendum poll in the first place, would have enabled us to avoid all this drama.

Despite the mistakes, the poor leadership, the lack of clarity and vision, I still think that the Union will prevail. The uncertainties that exist about an Independent Scotland; the unknown economic impact; a new nations place in the world…and of course the guarantee of ‘Devo Max’.

When people go into the polling booth next week the majority of them will, in my opinion, vote NO. I wouldn’t put money on it though. 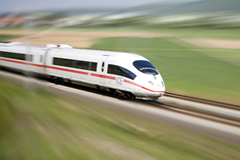 Despite the fact that the project is one of the most important infrastructure schemes ever proposed for the north of England, there remains a huge amount of apathy from business leaders to the much discussed and debated High Speed 2.

This is largely because the new fast tracks from London to the North are not likely to be laid anytime before 2026, with full completion not due until 2032. Add to that timescale the inevitable delays that seem to accompany every major British infrastructure project, and we’re more likely looking at 2035, by which time many of us will be eligible for a senior citizens rail card – if we’re still here at all.

However, this is to miss the point of how the North and its great cities and regions can market, promote and attract investment.

Speaking to several overseas visitors and potential investors over the past few weeks at the International Festival for Business in Liverpool, and it is interesting to note that they are vaguely curious about the past ten years; certainly interested about the next ten; but most quizzical about what strategies and plans are in place for the next twenty five years.

If you are representing a company that is looking to relocate or establish a major brand in a new city, then it is not unreasonable for you to want to be confident that your investment is being made in a place that has a sustainable, long term future.

This is why the winning of the argument about HS2 is so crucial. And then HS3 on the back of it, to better connect northern cities together.

Getting to London thirty minutes quicker may or may not be a killer HS2 argument for many, but HS3, the ability to then connect Manchester to Leeds on modern, high speed trains and tracks must surely win the approval of any serious business leader in the north.

Whilst London continues to plough hundreds of millions of pounds improving its infrastructure, and is squabbling not about ‘if’ a new airport but ‘where’, there is not a whisper of discontent from the Capitals chattering classes or the Westminster political fixers. Money spent in the south, it seems, is unquestionably well spent.

The nonsense spoken of in terms of the costs surrounding HS2 must be seen as what they are – an antiquated vision of a dilapidated, slow moving north, grateful to be kept afloat by the crumbs from an ever growing, indeed overflowing, South East table.

Of course the renaissance of our big cities in modern times, Leeds, Liverpool and particularly Manchester, has been remarkable. But for us to continue and indeed accelerate the progress of our region, then investment not only in rail, but on our road networks too, is absolutely essential.

HS2 and HS3 may not be here in your lifetime – but those international companies and investors want to be confident that it will be here at some point. And that is why HS2 is important now, and why we must fight enthusiastically for it to be delivered.

The strategic economic plan recently produced by Leeds is evidence that innovative, entrepreneurial and deliverable policies can emerge from regional agencies – but equally demonstrates the frustration that Northern city leader’s face when trying to implement positive change.

An executive summary of the Leeds city region document can be read here and it is clearly an ambitious, realistic strategy that articulates the huge opportunities and potential of Leeds and its surrounding areas. It is a plan strengthened because of the broad support it has from an increasingly cohesive, co-ordinated public sector and a private sector that is keen to see economic growth accelerated.

In recent weeks there has been much talk about the growing North-South divide. To address that unhealthy chasm then, government should welcome and back ideas such as getting on with HS2, investing in major infrastructure improvements, building more housing and making Leeds an IT and digital centre of excellence. But more than this, Westminster needs to give the city region the tools to get on with the job.

Funding for transport projects, allowing Leeds to retain the receipts from the disposal of HCA assets across the city region, allowing the newly established Combined Authority to recover VAT and returning revenue funding to the Local Growth Fund are all reasonable asks that the government should agree.

Without these relatively minor changes at central government level, without a degree of decentralisation of finance, decision making powers and responsibilities, and without a recognition that Leeds knows what is best for Leeds, then this impressive plan will only be partially delivered – and that economic imbalance between North and South will get worse rather than better. 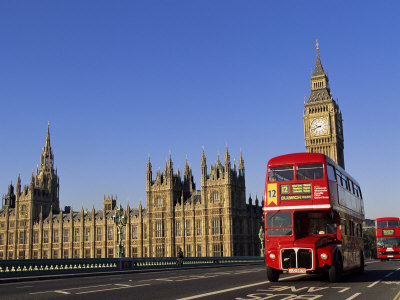 Without wishing to generalise too much, I would suggest that the current bunch of Parliamentarians that represent us are of a significantly poorer calibre than in previous parliaments. One only has to look at the respective front benches to recognise that all the mainstream parties are short of talent. Indeed how many ministers and shadow ministers can you name?

Those who do have a bit of quality and the ‘X’ factor are in huge demand from within their own political organisations and from the outside world, so if you want Chuka Umunna or Boris Johnson to appear at something for you in 2015 I’d advise you book them now. Come to think of it, Boris isn’t even an MP nowadays, though internationally he is the UK’s most recognisable politician.

Of course this dearth of talent is not simply about what MP’s are paid. It is about the increased pressures on family life and the abject failure of the House of Commons to modernise its procedures. It is about ‘cabals’ and cliques in party associations and constituency parties who stitch selections up for their mates. It is about 24/7 media scrutiny of all that you do as a public figure.

But ultimately salary does matter. Why would a captain of industry, a young entrepreneur or a creative talent give everything up to put themselves forward for a seat in a dragons den where there place is re-advertised every four years however good their individual performance, if the annual remuneration is less than a Premiership footballer earns in a week?

The job of an MP is a tough one, a time consuming one and one that is high on pressure. If we want to attract good people to this important role then we will have to be more generous and mature when it comes to paying them. The recommended 75K has hit the headlines this week. Buried was the radical change to expenses and pension rights that actually leaves MP’s no better off.

We can continue to compare our MP’s to care workers and beat them up every time a salary increase is recommended by an independent body. In that case we have to accept that we will continue to get the MP’s we deserve. In other words, get what we pay for…