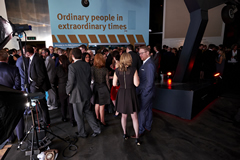 There has been a bit of controversy of late in Liverpool with news that a new networking brand ‘Twit Faced’ was about to launch in the city.

Established in Manchester, Twit Faced is organised by a bunch of colourful entrepreneurs, largely from the creative sector of town, and the purpose of the quarterly Friday night out is for business people to come together, let their hair down, have a good time, and, possibly, make some useful business contacts in the process.

Some in Liverpool have suggested that the brand encourages irresponsible drinking behaviour and alcoholism! The same folk who have been pretending for years that Downtown’s very own ‘Sexy Networking’ brand is in some way an open door for sexual predators.

These prudish critics have never bothered to come to a Sexy Networking evening in the ten years we have been hosting them – nor I guess a Twit Faced event in Manchester either– but on the back of what are very clearly tongue in cheek brand names they feel able to take cheap shots (forgive the pun), criticise and make all sorts of false assumptions and accusations.

Comparing Sexy Networking to some sort of cattle market; or Twit Faced to a drink till you drop beer fest is akin to claiming that the Chamber of Commerce’s ‘Eat and Greet’ event promotes obesity.

These are simply brand names that are attempting to stand out from a crowded and, sadly, largely stale, male and pale business networking circuit. Whilst Downtown, Sexy Networking and all, celebrated a decade of activity earlier this year, over 80 networking ‘brands’ have been a gone in the city of Liverpool alone. Many networking platforms in Leeds, Lancashire and Manchester have crashed and burnt too.

Stale cucumber sandwiches, a warm glass of house wine and some stale nibbles in a room full of grey suited blokes is far more offensive networking experience to me than a colourful brand name.

For the 200 plus business folk who attend these ‘edgy’ entitled events, they serve a social and business purpose and there is nothing wrong with that. If you don’t like the name of the event, then don’t attend. But don’t be making things up and making assumptions that you simply cannot back up either. And here’s a thought – try setting up a half decent business networking event yourself, and see how you get on. As I said earlier, many, many have tried – and failed miserably!

Sexy Networking won’t be here forever – but it will never and has never been a platform for lewd behaviour anymore than Stamford Bridge was a football venue where you could go and enjoy a quick grope because Ruud Gullit introduced ‘Sexy Football’ to Chelsea.

I probably won’t attend Twit Faced if and when it does launch in Liverpool. But good luck to it, because the twenty-something entrepreneurs who are emerging as the future businesses of tomorrow are probably looking for something different, something new – and this could be it.

Meanwhile, my Downtown events team will be spending this afternoon coming up with another dynamic programme of events for 2015 that I promise you it will be as eclectic, entertaining, exciting and effective as ever. I look forward to seeing you at some of them next year.