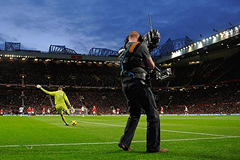 The next round of television rights for the product that is the Premier League is about to be negotiated, and various proposals are being presented by the media companies that will give the once ‘beautiful game’ even greater riches in exchange for even greater flexibility as to when games are played; and the notice period that has to be given in announcing televised fixtures.

Potentially this means that we will see ‘live’ games on TV from Friday through to Wednesday evening.

We have already witnessed the further dilution of our once feted FA Cup this season, with TV insisting on 3rd Round ties being played on a Tuesday night – meaning that the 4th Round draw had taken place before some of the previous round of games had been completed. Now, night time kick offs and even more bizarre kick off times look likely to be introduced as FA Premier League bosses prioritise the chasing of the shilling over the interest of supporters.

There is no doubt that the Premier League has been more of a force for good, with greater investment in stadium facilities; a more family friendly environment at most grounds; and a competition that is the UKs most successful export product.

Nevertheless, the Television viewing public, whether they be in the pubs of Moss Side and Walton or the bars of Delhi and Shanghai, are as hooked on the ‘product’ not simply because of the unpredictability of the result and the patchy quality of football on offer, but by the fabulous atmosphere that is generated by fervent, bonkers supporters of English football clubs.

If the powers that be continue to mess around with fixture planning and kick off times, then attendances will, sooner or later, begin to be hit – and when that happens the FA will find themselves in a much more difficult round of negotiations with the media outlets than has been the case thus far.

There is a simple solution to all of this nonsense. We should go back to the entire weekend programme being played on a Saturday at 3PM.

The argument that this would adversely affect attendances is patently nonsense now, as any football supporter who wants to watch a game live via a TV, iPad or laptop can easily find a channel that is streaming the game of their choice – or find a pub that has a foreign channel showing the game.

Saturday at 3 O Clock is the traditional time for football in England. It fits with our culture, and offers supporters the certainty of planning their match days, whilst also significantly reducing the number of ‘domestics’ as fans justify to their partners why they are having to leave the family home at 8.30am to watch a football game that starts at 11.30am (Man City vs Everton a couple of seasons ago).

There is a case for playing a ‘headline’ game on Sunday at 4pm, but other than this, for me, it’s Saturday’s all the way.

And if we could also convince UEFA to see the sense of re-introducing a knock our UEFA Cup, played on Wednesday night, rather than the crazy Thursday evening Europa League, we’d really be making some progress.