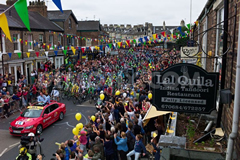 There are many things that distinguish my home town of Liverpool from Leeds, and before you Yorkshire folk start quoting the fact that Leeds has the biggest professional services and finance sector in the UK outside of London; or that Leeds is the home of the most impressive talent as far as the health sector is concerned; or indeed that Leeds has a population almost double the size of its Merseyside counterpart, can I remind you that Liverpool has TWO Premier League football clubs, and both of them are competing in Europe next season!

On a serious note though, there are many similarities between these two Northern giants too. Both have fallen behind Manchester in economic and reputational terms and, albeit grudgingly, accept that we are playing ‘catch up’ with the region’s major powerhouse. Both Leeds and Liverpool failed to introduce a modern, twenty first century mode of travel in the way in which Greater Manchester has done through its super tram system, leaving Leeds to fight for a ‘Trolley Bus’ project, and Liverpool still searching for an alternative to its own failed tram initiative. Both cities have also successfully utilised physical regeneration to enhance their offer, most particularly, though not exclusively, through large scale retail developments.

Where Liverpool was slightly ahead of Leeds was in the area of events. Winning the title European Capital of Culture 2008 was its catalyst for a much stronger visitor and destination economy focus for the city, and since 08 Liverpool has hosted the Global Entrepreneurship Congress, hosted the world famous French ‘giants’ outdoor extravaganza and is currently the home to a seven week International Festival for Business which will be returning to Liverpool in two years time.

This will surely encourage Leeds to take full advantage of the Tour de France, which was so spectacularly and superbly organised across Yorkshire last weekend, and to begin to build a genuine legacy.

Things move so quickly now that the success of the Tour, however great it was, will soon be forgotten. Now we must move on to the next big thing for Leeds; find the next major event to host; cement the city’s position as a great venue for world renowned occasions.

I am sure Tom Riordan, his team at the city council, the inspirational Gary Verity and indeed Leeds & Partners are planning the next moves as far as a future events programme is concerned. I would simply urge them to engage with Leeds’ independents, creative’s’ and artisans, of whom there are many in the city, who can often bring a fresher more innovative eye to such things.

It is no accident that Liverpool built its success through the maverick figurehead Phil Redmond. Indeed twenty years ago a ‘posse’ of renegades that included Tony Wilson, Tom Bloxham, Colin Sinclair and Peter Saville formed the ‘McEnroe Group’* and were eventually engaged by the civic leaders to help shape Manchester’s future.

We need to use the Tour as Leeds’ catalyst as another great Northern events location. We need to build a legacy. We need to engage with the wider private sector across the city, those that are not necessarily ‘the usual suspects’.

*The McEnroe Group was formed by a group of independents and creative’s’ in Manchester following the publication of a blueprint for the rebuilding of the city by Manchester’s then regeneration agency following the IRA bomb of 1996. It was named the ‘McEnroe Group’ because they said the council ‘cannot be serious’ about those plans, which they believed lacked dynamism, imagination and ambition. Senior council leaders, to their credit, agreed, engaged with the underground Militia and twenty years later we can see the results.