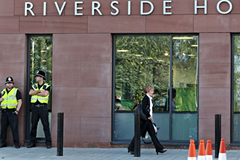 The revelations from Rotherham this week are beyond shocking. Sadly they are the latest in a series of exposes that have been unearthed in recent years, including the appalling cover up’s in Rochdale that allegedly involved the town’s former MP Cyril Smith.

Over the many years that I have been involved in scrutinising the care and welfare of children, firstly as a politician and latterly as a non executive director of an NHS Trust, it has struck me that the multi agency approach we have to childcare and child protection is inefficient and confusing, and allows a relatively easy way for those managing children’s lives to ‘pass the buck’.

I have challenged this on more than one occasion, and although there was some tinkering at the edges, there was little appetite among senior officials for the radical overhaul that is clearly needed in this arena. This isn’t because they don’t care, or see the sense that the potential changes could bring; more often it is the lack of resource and capacity to tackle the established status quo, or a fear that there own organisations position may be compromised.

All agencies will claim to collaborate and say that they are willing to ‘give up’ certain powers and responsibilities for the greater good of the community – but I am yet to meet any that will genuinely concede in areas that will see their own resource, influence or ‘empire’ reduce.

We have too many social services departments; too many health agencies and hospital management structures; too many policies and policy changes and too many chiefs!

Streamlining the public sector, not only in the childcare sector but right across the board, is something all governments say they are in favour of. But without exception all government’s bottle out of implementing anything that is radical, falling back on the hugely false ‘democratic’ argument that local people must decide how they are governed.

In reality this means local council’s or health organisations ‘consulting’ with a small number of residents, and then reporting that the status quo is backed by all of us.

Turkey’s don’t vote for Christmas, so we will never have councillor’s supporting calls for their local authority to be merged with another, scrapped or even downsized. Similarly, why would a board of directors of a health agency vote for their own early demise by supporting the streamlining of management structures, or merging hospital management administrations?

This is at the core of the failure of our public sector to deliver effectively across a whole range of services – highlighted by yet another scandal in the most sensitive of all provisions, children’s welfare. Will the latest revelations change the resistance to change? I’m not holding my breath!

FOOTNOTE: Any senior public official that has been named and shamed in the Rotherham report, most particularly the crime and police commissioner, should be writing their resignation letters over the weekend.