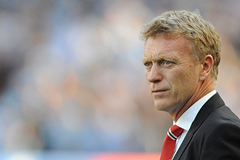 In the summer Manchester United had a decision to make. The most successful British manager of all time, Sir Alex Ferguson, was standing down and they needed to find a replacement who would continue to lead United to trophies at home and abroad.

The obvious, cast iron guarantee candidate was a flamboyant Portuguese man by the name of Jose Mourinho. With him in charge there would be little doubt that the Old Trafford side would continue to dominate domestic football and challenge for the Champions League.

That he wasn’t appointed came down to the fact that some in the boardroom  and possibly Sir Alex himself, felt that Mourinho was too outspoken, controversial and, perhaps, too charismatic.

Instead of appointing the most obvious and well qualified man for the job, United took a punt on David Moyes. A safe pair of hands, for sure, but with neither the experience, track record nor credibility of ‘the special one’ and a huge risk too.

A glance at United’s results since Moyes’ arrival will tell you that they have had a poor season so far, and it is unlikely to get much better following a surprise 2-0 defeat in Greece this week in their Champions League tie. Moyes looks like a man who is out of his depth. Maybe next season it will be different – but don’t hold your breath.

What has this got to do with the politics of Liverpool you may ask. Well, the proposed Halton, Sefton, St Helens, Knowsley, Liverpool and Wirral Combined Authority, so called as a result of private lobbying from city region districts, now looks like it will be led by a David Moyes equivalent.

In Joe Anderson Liverpool has an elected city mayor with a massive electoral mandate. He is someone who has a profile at regional, national and international level. During his leadership, the city has continued to grow, with more private sector jobs being created in the city than ever before; and he has brought the Global Entrepreneurship Congress and the International Festival of Business to the city. In addition, successful jaunts into the continent with the Shanghai Expo, MIPIM and the States add to his impressive CV – not to mention his bold move to open a Liverpool Embassy in London.

Despite all of this, and the fact that the city he leads accounts for over 70% of activity in the city region, the suggestion is that the leader of Wirral will chair the new Combined Authority organisation. Presumably this would be a one year appointment, and then we would have ‘Buggins Turn’ with Halton, St Helens, Knowsley and Sefton taking their place at the head of the table periodically. What an absolute nonsense.

If the name of the new body hasn’t already done so, then this type of political manoeuvring and game playing will most certainly turn the business community and potential investors off.

Joe Anderson may not be the pin up that Jose is, but in Liverpool city region terms he is ‘the special one.’ He is the only individual politician who can begin to restore credibility to an already discredited organisation, and the only one that can guarantee success.

We need to appoint Mayor Anderson as the leader of a Liverpool City Region Combined Authority – or accept that, just like Manchester United, decline in our performance is inevitable.