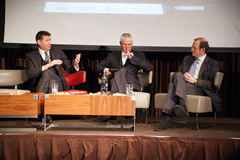 We’re all in this together…

It is a phrase that the chancellor has trotted out regularly during his near five year tenure in number 11 Downing Street, to explain and justify the austerity programme he has embarked upon since taking office, but it is now a mantra that should be adopted by northern cities as the devolution bandwagon continues to gather speed – but with only Manchester in a position to take full advantage of the progressive plans that are being presented.

I have had the opportunity of speaking with both the Leader and the chief executive of Manchester City Council in recent weeks, and they are naturally delighted with a ‘Devo Manc’ package that now gives them budgets, powers and responsibilities over a whole range of services including housing, health, business support and economic development; and following the budget on Thursday the local retention of business rates raised in Greater Manchester too.

But, far from cocking a snoop at their northern neighbours, who have failed miserably in grasping similar offers made to them by central government, Sir Richard Leese and Sir Howard Bernstein are desperate for others to ‘get with the programme.’

For, as Leese pointed out at the Northern Powerhouse dinner hosted by PwC in Manchester on Wednesday night, it will be much more difficult for any future government to dilute the Manchester devolution package if several others are enjoying the same or similar devolved powers.

He and Bernstein are also acutely aware of the need to connect the north far more effectively and efficiently through big infrastructure projects on road, as well as rail, if their city is to meet its full potential. And, they will also know that Manchester is now the undisputed capital of that Northern Powerhouse, meaning that they can be far more generous in supporting and ‘coaching’ other city regions to improve both in economic and governance terms.

To this end, I hope Leese and Bernstein continue to explain to Leeds and Liverpool that it is not only pragmatic to accept the notion of a directly elected leader to oversee and be accountable to the electorate for all the additional powers that are available, but it is, democratically, the right thing to do.

What government in its right mind would hand over billions of pounds in resources to a bunch of largely faceless councillors, who may or may not be in a leadership position in twelve months’ time, depending on the whims of not only the local electorate, but their own political group as well?

The idea that you can ask for radical changes to your power take, without accepting an equally radical change to your governance arrangements is clearly a nonsense.

Politicians in Merseyside and Yorkshire may cry ‘it’s not fair’ – but without any movement on the governance agenda from them, then it is most certainly right.