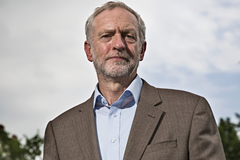 Last Saturday the Labour Party took its first significant step to guaranteeing defeat at the next General Election.

Whether Jeremy Corbyn survives in his new role as leader of Her Majesty’s opposition for one month, one year or the remainder of the parliament, Labour’s folly in putting such a maverick and off the wall personality at the top of its tree has already turned off enough of the great British public to ensure another five year term for the Conservatives, probably led by George Osborne, in 2020.

I won’t rehearse all the arguments and objections that were consistently raised about Corbyn’s fitness to lead during the party’s leadership selection, as it is a matter of record that his opinions on a whole range of things from NATO membership to managing the economy are so out of step with even the vast majority of his own parliamentary party that it seems a little unnecessary and pointless to do so. All those interested surely know his policy pronouncements by now.

However, even the most controversial and ‘extreme’ politicians are not wrong about everything, and Corbyn, 35 years a parliamentarian, is no exception.

That the Prime Minister and the Chancellor have managed to persuade 37% of the electorate that there is no alternative to austerity does not mean that the validity of that option should not be challenged and scrutinised. In particular, the inequitable sharing of the pain between north and south in terms of public sector cuts is worthy of vigorous debate.

The renewal of a hugely expensive and updated version of the Trident nuclear deterrent may, once again, be generally accepted as having the support of a majority of voters. But have defence experts considered a different approach, a cheaper if no less aggressive and effective security system for the British Isles? Is this a question that, given our urgent need to find savings from every area of government spend, should not at the very least, be posed?

A policy that cuts welfare benefit payments to those who are currently in work is another scrap worth having, as not only does this strike many people as unfair, but it goes against the governments stated objective of encouraging people to find gainful employment.

The new Trades Union legislation, zero hours contracts, our future in Europe and immigration are all areas of policy that Corbyn has raised big question marks over.

Jeremy is certainly not short of questions. In asking the public what they would like him to quiz David Cameron on at Prime Ministers question time this week, the Labour leader received 40,192 suggestions.

No, he is not short of questions, our Jeremy. Unfortunately, he appears to be struggling for answers. And even where he has come up with proposed answers, they get his party even further away from the question they really need answering. How does Labour ever win an election in the UK again?