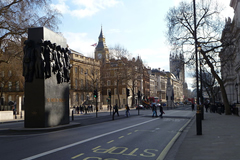 The corridors of Westminster power have been shaken and stirred following the fallout from the Scottish devolution referendum campaign, with those in favour of independence losing the battle but, arguably, winning the war.

The ‘solemn vow’ from the three mainstream party political leaders that promised additional powers TO THE Scottish Parliament on a whole range of issues from welfare to tax will have to be delivered, and this has left Whitehall mandarins and (mostly) Tory MPs banging on about fair votes for the English and an even playing field.

The answer, they suggest, is an English Parliament. Quite frankly I can think of nothing worse. I have sleepless nights imagining the type of country my kids will grow up in with a cabinet made up of John Redwood type characters, ably supported by a rump of Nigel Farage –led UKIPers no doubt, in the unholiest of unholy alliances.

It is also incredible to me that those politicians that have happily gone through the voting lobbies to bludgeon through austerity budgets that have so clearly hit the north of England harder than the south can be whinging about ‘an even playing field’ now.

What London centric politicians, civil servants and commentators need to understand is that it is devolution beyond Westminster that is needed, not devolution within an archaic institution that is no longer fit for purpose.

If Scotland is to get Devo Max then we in the North need to demand Devo Met! The city regions of England north of the Watford gap have to be given the same powers, responsibilities and opportunities as our Scottish counterparts.

Labour is right to object to the Prime Ministers bid to rush through legislation that would create a new constitutional settlement that none of us have discussed, let alone signed up to. Nevertheless, the idea that we need a ‘constitutional convention’ to sort a new governance structure for the UK is highly uninspiring too – and unnecessary,

A whole range of senior figures, including Lord Heseltine and Lord Adonis, have written extensively on city region led decentralisation that would bring together leading decision makers with business leaders to create a genuine ‘localism’ and Authorities that can deliver on what is important to their own regions economic growth and social agendas without going cap in hand to central government.

As Sir Howard Bernstein said at the Downtown Leeds event last week, it is beyond nonsensical that he has to get permission from a pen pusher in London in order to simply close a road!

Progressive politicians and business leaders should be arguing for a timetable to deliver city region and county region governance models. We need an action plan to deliver this – not another talking shop.

Change is now inevitable, but what type of change? The North of England needs to make sure Scotland’s gain does not lead to Northern pain, with a stitch up that would still see us governed and dominated by the Westminster elite! Downtown will be campaigning for Devo Met – I hope you join us.